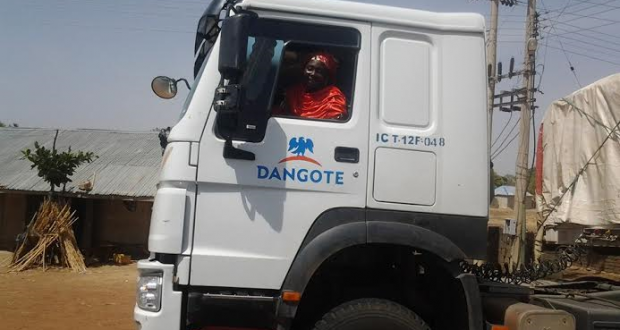 Three people who were about to cross an expressway which leads into the Arepo community were sent to their early graves by a Dangote truck driver identified as Dairu Murtala who was driving against traffic and at top speed.

According to reports, the driver after crushing his victims to death showed no remorse as he made to escape the scene of the incident but was chased and eventually apprehended at Magboro, a neighboring community by some motorcyclists.

A witness who saw the whole scenario play out said the driver was driving at top speed crushing the victims to death on the spot.

According to him, another lady and man would also have fallen victims but for the quick reflex of the man who whisked the lady and himself out of the truck’s deadly path.

“We were all at the bus stop when the truck sped past us. The driver did not even hoot.

“The three men, who wanted to cross the expressway, were only looking at a side of the road. They didn’t know that the truck was fast approaching from the other side.

“The truck crushed them and they died on the spot. It even dragged the body of one man for some distance”.

The mangled bodies of the victims were later removed from the scene by officials of the Federal Road Safety Corps (FRSC) but not after the driver was beaten to a pulp by a gathering mob which attacked him.

It only took the intervention of policemen from the Werewa division to rescue the driver who was already bleeding profusely from the attack by the mob.

Confirming the incident, the FRSC Ogun State Sector Commander, Clement Oladele said, “The accident occurred at the Ibadan to Lagos route around 8am. The crash involved an ash coloured Dangote truck, with number plate DTF 118 XA. The truck driver hit three persons, all males, and killed them on the spot.

“The crash was caused by dangerous driving and route violation. The police apprehended the driver and towed away the truck, while an FRSC ambulance conveyed the corpses to the Sagamu Hospital mortuary,” he added.