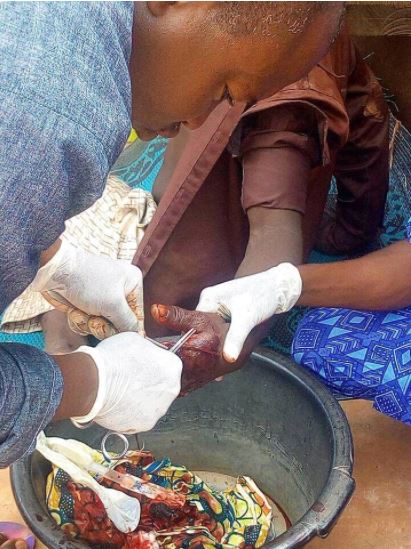 Bloody: Fulani Men Cut Off Fingers of Man During an Argument in Niger State (Graphic Photos)

Bloody: Fulani Men Cut Off Fingers of Man During an Argument in Niger State (Graphic Photos). What appeared to be a simple argument has resulted in a man losing his fingers after they were cut off by some Fulanis.

A young man identified as Hassan has been left in a state of anguish after his fingers were cut off by some Fulani men during an argument on Friday in Matane, Mashegu Local Government of area of Niger State.

Reporting the incident, a resident, Mr. Nura Alhassan Rariya News platform that the problem started when the Fulanis came into the town to buy cigarettes and drinks in the community.

The victim who was probably in the area told them he doesn’t like the smell of cigarettes as they argued over it. This argument reportedly angered the guys who engaged in a fight with the victim as they used their weapons on him – cutting his fingers in the process.

The incident almost caused an unrest in the community as youths decided to retaliate the attack by the Fulanis but were persuaded and controlled by security operatives who arrived on time.