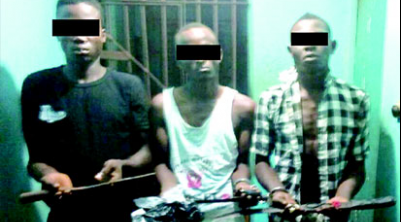 Three notorious robbery suspects identified simply as Sale, Emmanuel and Uduku were all arrested at their hideout in Gariki Ugwuoba area of Enugu State with dangerous weapons by cops.

According to operatives of the Nigerian Police, Oji River Division, the three man robbery gang have been terrorising motorists along Ugwuoba, Awka, Oji Road and its environs.

A police source said the culprits who were caught unawares had been a thorn in the flesh to motorists plying Oji Road.

The police source said; “These suspects, alongside other gang members who are now at large, have variously robbed and inflicted gun, machete and dagger injuries on motorists and commuters along Enugu-Onitsha Expressway by Ugwuoba axis.

“This arrest was based on intelligence-led policing, community relations and partnership as well as raid of all suspected criminal hideouts or areas likely to be used by hoodlums.”