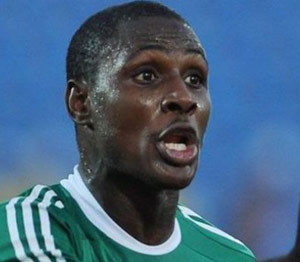 Rohr confirms Ighalo’s invitation for Cameroon clash. Super Eagles coach, Gernot Rohr has confirmed the invitation of Odion Ighalo for their upcoming games against Cameroon in the World Cup 2018 Qualifiers.

Nigeria will take on Cameroon  in back to back games when the Africa World Cup qualifying series resume next month, with the Indomitable Lions trailing the Super Eagles by four points in group B.

The coach who is presently drawing up the list of players he plans to use to prosecute the game confirmed that Ighalo will be in the squad against Cameroon, marking a return for the striker who wasn’t called up for the 0-2 loss against South Africa in the AFCON 2019 Qualifiers.

Ighalo has been in fine form for Chinese side Chanchung Yatai and according to Rohr he will be in the squad.

Rohr also dropped a hint about a possible recall for another China based striker Obafemi Martins as he confirmed he is looking at other experienced players to beef up the attack of the team.

Rohr hinted that he is monitoring the performance of some strikers, and mentioned China where Martins is presently the only Nigerian striker playing regularly bar Ighalo, as Brown Ideye has been axed from the first team of Tianjin Teda.

“Balogun is also fit, he is experienced and we have also some strikers with a little more experience, Odion Ighalo also not only him.

There are also other ones. So I think in the next week we will monitor all of them to be sure, we can take the best ones for these big games against Cameroon”, he said.
Read More Stories

Osinbajo is sick, his nightmare has just started – Fani-Kayode