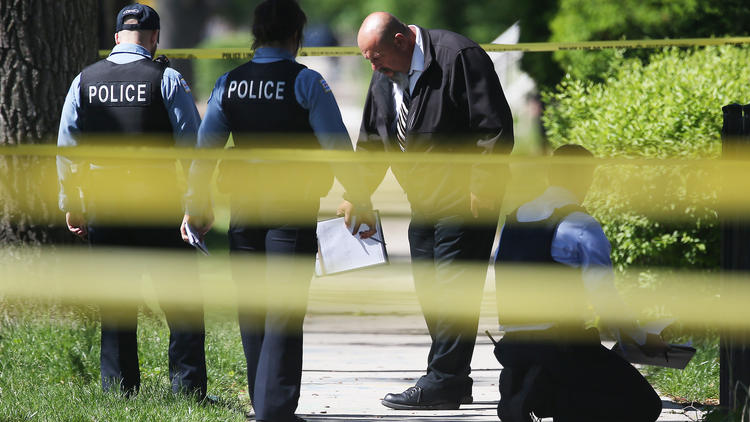 3 killed, 1 seriously wounded in shootings on South Side

Three people were killed, and two people, including a teen boy, were seriously wounded Thursday in shootings on the South Side, according to Chicago police.

Most recently, a 23-year-old man was shot in the Washington Park neighborhood about 11:50 p.m. Thursday before police found him on the ground in the 5600 block of South Wabash Avenue. He was taken to Stroger Hospital in serious condition with gunshot wounds to the torso and legs.

One of the fatal attacks was a double shooting around 2:30 p.m. in the Avalon Park neighborhood, police said.

An 18-year-old woman was killed and a 17-year-old boy was wounded when two people approached them and opened fire in the 8100 block of South Kimbark Avenue, police said.

The woman was hit in the chest, and was the boy suffered wounds to the back and leg. Both were taken to Stroger Hospital, where the woman was pronounced dead, officials said.

About 11:45 a.m., a 30-year-old man was shot two blocks west of Ogden Park in the Englewood neighborhood.

The man was identified as Bobby Lloyd, of the same block where he was shot. He was taken to Advocate Christ Medical Center in Oak Lawn and pronounced dead at 12:45 p.m., according to the Cook County medical examiner’s office.

A person was in custody and charges were pending, police said.

Another  fatal attack happened about a block from Ninos Heroes Elementary School in the South Chicago neighborhood Thursday morning.

Officers found a 27-year-old man slumped over in a vehicle with a gunshot wound to his body about 8 a.m. in the 8200 block of South Escanaba Avenue. The man was identified as Scott T.L. Coleman, of the 8100 block of South Muskegon Avenue. He was taken to Advocate Trinity Hospital, where he was pronounced dead at 8:08 a.m.

Police were called to check someone’s well-being and found the man inside the vehicle, police said in a media notification. Police did not release information on the circumstances of the shooting.

Tribune data show the last time someone was shot on the block was in February 2013, and there have been no homicides on the block since the Tribune began keeping detailed homicide data Jan. 1, 2013.