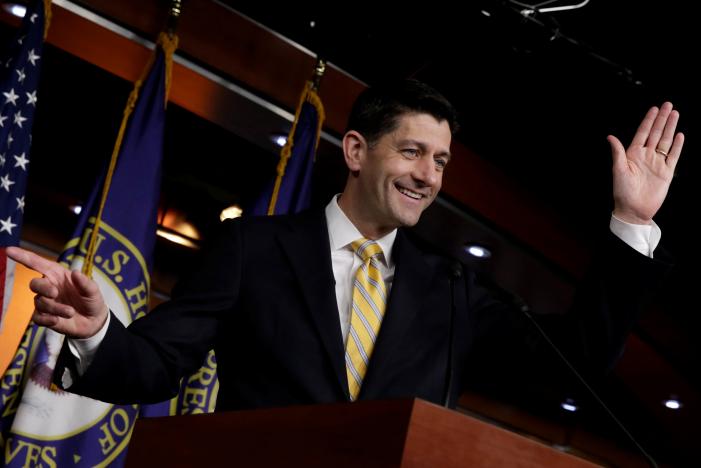 U.S. House Speaker Paul Ryan greets children of members of the press during "Take Our Daughters and Sons to Work Day" on Capitol Hill in Washington, U.S, April 27, 2017. REUTERS/Yuri Gripas

Trump struggles to win over moderate Republicans on healthcare overhaul

Time was running short for President Donald Trump to attract enough votes to pass a new bill to overhaul the U.S. healthcare system this week as Republican party moderates held out, fearing a backlash from voters worried about losing insurance benefits.

A senior House of Representatives Republican aide said on Tuesday night no decision had been made on bringing legislation to the floor this week before the House is due to start a week-long break late on Thursday.

A bill would need to be filed by late Tuesday night or early Wednesday morning to hold the vote before the break.

The lack of movement among Republicans puts Trump in danger of his second major legislative setback, raising questions about his ability to secure passage of other parts of his agenda, including a major tax reform plan.

Most House Freedom Caucus Republicans have gotten on board with the new proposal, but Democrats are vowing to oppose any attempt to unravel Democratic former President Barack Obama’s signature healthcare overhaul.

The latest Republican plan would allow states to opt out of Obamacare provisions that force insurers to charge sick and healthy people the same rates. That is seen as a concession to conservatives to attract their votes.

Trump insisted in an interview with CBS News that aired on Sunday that the protections for those with pre-existing conditions would remain.

“I think it’s time now” for a healthcare vote, the Republican president said at the White House on Tuesday.

Even if a plan passes the House, it is expected to face a tough fight in the Senate, where Republicans have a narrower majority.

Republicans contend that Obama’s signature 2010 healthcare law, which allowed some 20 million Americans to gain medical insurance, is too intrusive and expensive.

The White House sent Vice President Mike Pence to the Capitol on Tuesday to meet Republican holdouts on the party’s latest effort to pass a healthcare overhaul.

Republicans remain divided over key aspects of the healthcare bill, with some lawmakers worrying about a potential spike in the number of people without coverage, or sharp increases in insurance premiums.

Representative Daniel Webster, whose central Florida district is home to many retirees, said Pence told him he would try to work out problems caused by proposed Medicaid spending caps that would limit nursing-home beds.

“I just think it’s going to cost us a lot in Florida,” Webster said.

Another Florida Republican, Thomas Rooney, said confusion over the potential loss of coverage for pre-existing conditions had his constituents scared that “they’re going to die because of a vote that we might be taking.”

Conservative groups such as the Club for Growth and Heritage Action started to increase pressure on moderate Republicans who were resisting the bill, such as Representative Billy Long of Missouri.

Left-leaning groups, including the Center for American Progress (CAP), were pushing their members to call lawmakers to urge them to oppose the healthcare bill, including via 7,000 medicine bottles delivered to congressional districts. Emily Tisch Sussman, a CAP organizer, said those efforts had generated “tens of thousands” of phone calls.