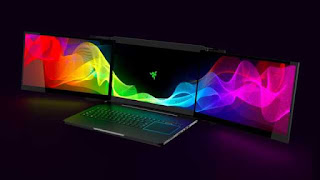 It’s been a busy year for Razer. The PC gaming peripheral brand has rolled out new keyboards, mice, and headphones, all while keeping its increasingly popular line of Blade gaming laptops up to date with the latest hardware.

I guess that means it’s time to have a little fun. Of the two major product announcements Razer has brought to CES 2017, Project Valerie is certainly the most eye-catching. The already-impressive Blade Pro is outfitted with three 4K IGZO panels, which automatically slide out from the system when you open it.

Whether Project Valerie will ever become real is up for debate, but it’s clear that Razer is interested in testing the waters to see if anyone out there would buy such a beastly system.

In case it wasn’t clear, here’s Valerie’s most important trait: three displays. When the system flips open, the two side screens slide out from each side, overlapping bezels at the interlocking edges. The resulting footprint is wide enough to prevent your seat neighbors on a plane from using their tray tables, which is either a blessing or a curse, depending on how often you need to work remotely.

For a laptop with such ambitious goals, Project Valerie is surprisingly svelte. It comes in at just around an inch and a half thick, although we didn’t actually see it closed – it is a concept product and not officially ready for shelves, after all. It also weighs just about 12 pounds. It’s not small, but it’s only somewhat larger than most 17-inch gaming laptops.

It helps that it’s built with Razer’s classic matte black styling, a unibody enclosure that feels as sturdy as it looks. When we first heard about Razer’s interest in a three-screen laptop, our mind went straight to images of lopsided, massive machines like the Acer Predator 21 X. We didn’t think that would make it to production, but Acer announced its availability at CES 2017. Perhaps Valerie is more possible than we thought. 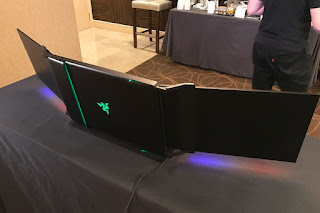 Okay, but does it work?

With the Razer Blade Pro as the base model, Project Valerie is supported by an Intel Core i7-7700HQ and an Nvidia GTX 1080, which is essentially the most powerful hardware you’ll find in a laptop anywhere. Still, three 4K panels is a lot to handle, even for desktop-grade hardware. We played Battlefield 1 for a few minutes, and were impressed with the clarity and decent framerate — partially thanks to Nvidia’s G-Sync — but without any idea as to quality settings or actual benchmarking data, we’ll reserve judgement.

From a more practical standpoint, Project Valerie is overkill, but for some users, it might make a lot of sense. If your work mostly has you in one place, with the occasional work trip or conference room meeting, three screens is a boon not just to productivity, but to potential presentation and organization power.

But gaming is its real goal, and it’s one field where Project Valerie excels. Nvidia’s 3D Surround tool lets you stretch a number of games across all three panels, for a 12K gaming experience that’s unparalleled in the laptop world. Even a three-screen gaming desktop would be a require work, some wires, and other hardware, but Project Valerie rolls it all up into a neat package.

Razer’s Project Valerie is an impressive, albeit unwieldy laptop. There’s no room for compromise, because three 4K panels and the GTX 1080 take up too much space. That said, the potential for multi-screen laptop use cases can’t be understated, and we’re left feeling like there might be a market for this sort of over-the-top mobile powerhouse.

Alternatively, if you’re a gamer always spending your hard-earned dollars on the most extravagant and eye-catching hardware around, your ears should perk up when Project Valerie’s name is mentioned. It’s a stunning and impressive piece of technology.

Likely to be very expensive

Still only a concept

WATCH THE VIDEO BELOW:-