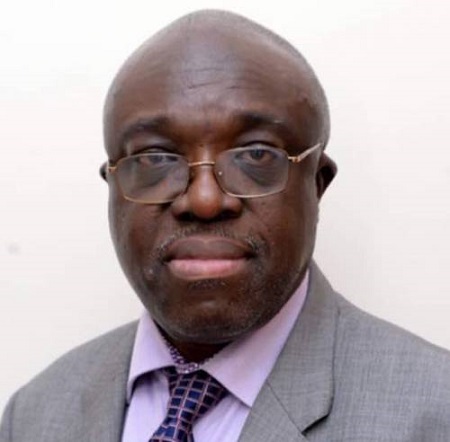 EFCC Nabs Retired Shell Petroleum Staff Wanted for Fraud, Misappropriation (Photo). A retired staff of Shell Petroleum, accused of fraud, has landed in the tough hands of the Economic and Financial Crimes Commission.

Obi Timothy Nwasike, a retired staff of Shell Petroleum, who was wanted in connection with a petition that accused him of fraudulent diversion and criminal misappropriation, has been arrested Officials of the Economic and Financial Crimes Commission (EFCC) yesterday.

According to SaharaReporters, Mr. Nwasike was arrested early Sunday morning as he arrived at Murtala Muhammed Airport in Lagos.

An EFCC source told SaharaReporters that the anti-agency had in August 2015 received a petition from a firm, Continental Alarm Limited, alleging that Mr. Nwasike fraudulently diverted and criminally misappropriated contract proceeds paid into his account.

The source further disclosed that Mr. Nwasike ignored the commission’s invitation to appear in its offices for questioning, preferring to go into hiding.

“He refused to appear before our investigators, and had remained at large since then,” said a law enforcement source, adding that they believed the fugitive was holed up somewhere in the United Kingdom.

Another source said Mr. Nwasike, accused of embezzling $115,000 belonging to Continental Alarm Limited, claimed through his younger brother, a lawyer, that he could not respond to the EFCC’s summons because of failing health. However, EFCC officials found proof that the fugitive sneaked into Nigeria sometime in December 2015, but failed to present himself at the commission.

Accoding to SaharaReporters, it was learned that the EFCC confronted Mr. Nwasike’s lawyer with evidence that his fugitive older brother had visited and even went to Ecobank to withdraw $3,000.

According to a source, Mr. Nwasike’s lawyer claimed that he was unaware that his elder brother visited Nigeria, insisting that his client did not owe him any obligation to report his movement within and outside Nigeria. The fugitive’s $3000 withdrawal was reportedly the last of the $115,000 that was paid into his account by Shell Petroleum for the Videofied project executed by Continental Alarm.

“This man refused to honor our invitation, claiming he was suffering from renal disease, but he was well enough to go to Ecobank to withdraw the last dollar from the contract proceeds he is accused of diverting criminally,” one EFCC source said, adding that the fugitive’s arrogant behavior earned him inclusion on a watch list.

It was learned that Mr. Nwasike remains in the EFCC’s custody following his arrest. One source disclosed that the fugitive was arguing that he should be let go on account of his purported ill health, a claim considered spurious by EFCC agents, considering the suspect’s past conduct.

“This is a man who has shown disdain for the commission by refusing to respond to our invitation, and now that he has been apprehended, he comes up with the claim of sickness. We consider him a flight risk as he has shown both a determination and ability to run and also hide,” one source said.

Mr. Nwasike, who hails from Ogidi in Anambra State, was disengaged by Shell apparently on account of acts of impropriety. He also reportedly met the same fate when he worked for Global Energy.