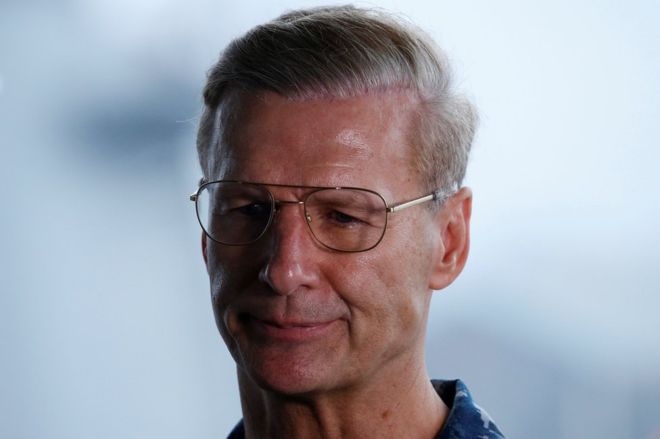 Ten sailors are still missing after the USS John S McCain collided with an oil tanker near Singapore on Monday.

Navy officials say human remains have since been found in sealed compartments on board the ship, which is now in port in Singapore.

The crash was the fourth such incident in a year.

In a statement, the Navy said it had lost confidence in Vice Adm Aucoin’s ability to command.

The Seventh Fleet, based in Yokosuka, Japan, is the largest forward-­deployed fleet in the US Navy, with some 50 to 70 vessels and submarines.

Vice Adm Aucoin, who has been its commander since 2015, was due to retire within weeks. His designated successor will replace him immediately.

His removal is the latest in a series of steps taken by Navy officials after the USS John S McCain collision. It is not clear when a formal announcement will be made.

The incident triggered a rare worldwide “operational pause” of the US Navy’s fleets as well as a review of operations.

The USS John S McCain was east of Singapore when it collided with the oil tanker Alnic MC before dawn on Monday.

The collision left a large hole in the destroyer’s port side – the left-hand side of the vessel facing forward – and flooded compartments including crew berths. Five sailors