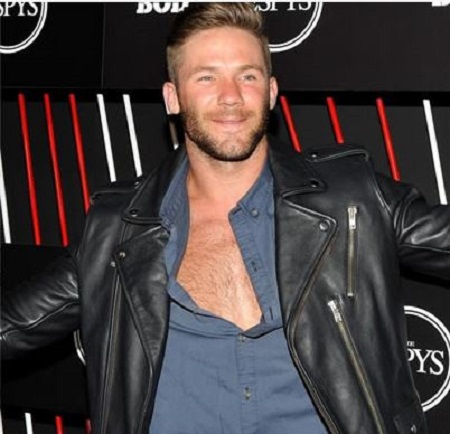 Surprising: Guilty Teacher Writes Apology Letter to His Student 11 Years After Graduation (Photos) –A guilt-ridden school teacher has written a letter of apology to his own student eleven years after he had graduated.

An American student whose teacher had told to forget his dream of becoming a professional, high net worth footballer got the shock of his life when he received a letter from the guilt-ridden teacher, apologising and seeking to put things in proper perspective.

While this doesn’t appear unusual, the time lapse between the offence and the apology seems to be an issue, as the letter came 11 odd years after the encounter.

The recipient, Julian Edelman, shared a photo of the letter he received from his former teacher who told him to set ‘realistic goals’ when Edelman had shared his ambitions for American football.

Fortunately, Edelman didn’t take the advice to heart, and he became a professional athlete who played for the New England Patriots —  a professional American football team.

See the letter and the addressee below:

‘Dear Jules, I’m not sure you will remember me: I was your teacher for your English 100 class at CSM in the spring of 2006.

‘I’ve been wanting to write to you for, oh, what seems to be a thousand years, to apologise to you for a flippant comment I made to you that semester. You may not even remember it but I’ve felt bad about it for years.

‘You made some comment about ‘going to the league’ and I said something about setting realistic goals, about how few people enter the ranks of the professional athlete, blah, blah, blah.

‘I don’t think it fazed you, quite frankly, but when I look back on it, I feel terrible, not because you proved me wrong but because I voiced an uneducated opinion that implied I had disdain for your passion for the game.

‘I think it was early in the semester, before I knew you, but how I could ever have doubted your tenacity and grit is beyond me!

‘Again, I doubt you’ve even thought about it twice, but even so, I’m sorry for wedging my foot so firmly in my mouth that day…’

Edelman tweeted the letter and wrote: 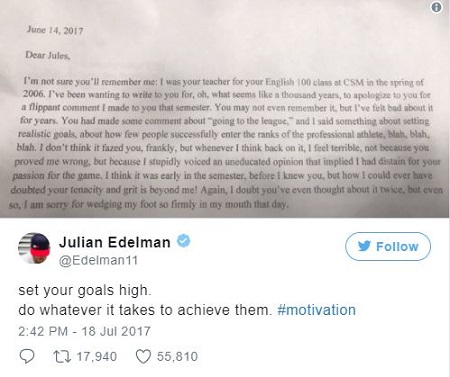 Set your goals high. do whatever it takes to achieve them.