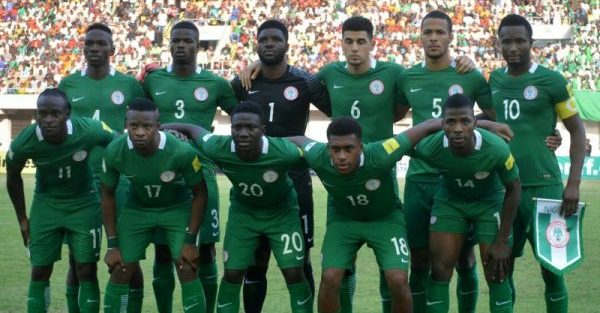 Despite the movement, the Eagles retained their sixth position in Africa.

The reigning African champions, Cameroon, who will play Nigeria in Group B of the 2018 FIFA World Cup qualifiers on September 1 in Uyo, also moved one place from 36th (in July) to 35th this August.

The Bafana Bafana of South Africa, who defeated the Eagles in an AFCON qualifier in Uyo, dropped two places from 64th to 66th.

Egypt remain Africa’s highest ranked team on 25th. Congo Dr, Senegal and Tunisia are second, third and fourth on the continent, before Cameroon and Nigeria follow.

Meanwhile, Brazil returned to the summit of the rankings, as world champions, Germany, dropped back to 2nd position. Argentina, Switzerland, Poland, Portugal, Chile, Colombia, Belgium and France occupy the third to tenth positions in the rankings.

The next FIFA/Coca-Cola World Ranking will be published on 14 September 2017.